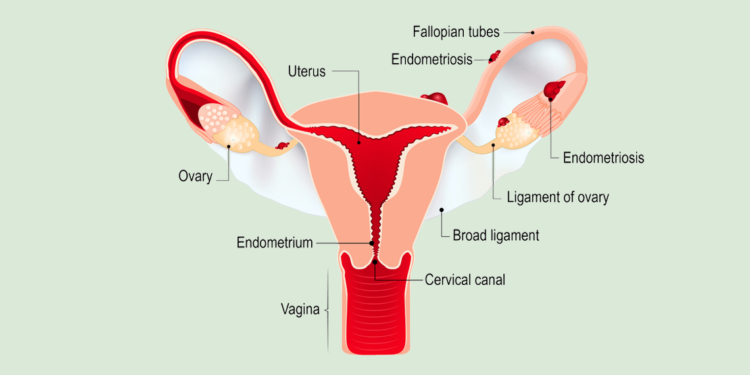 Endometrium is the collection of cells that make up the internal lining of the uterine cavity. It is the precise location where the embryo will implant upon fertilization and grow as a fetus. By definition, endometriosis is a condition where this accumulation of cells is not located where it is supposed to be, but is spread outside of the uterus. In the ovaries, cysts known as endometriomas may form. These are generally referred to as the “chocolate cysts”. Implants of endometriosis may grow on the peritoneum (the lining of the abdomen and pelvis), which is mostly associated with blockage of the fallopian tubes. In some instances, endometriosis can grow underneath the peritoneal lining, causing other problems. Therefore, endometriosis is a condition which can be directly related with infertility.

The body’s immune mechanism perceives the bleeding as if there is an “open wound” inside the body and tries to rectify it. Every month a similar healing process is in order and the peritoneal cavity becomes home to many scar tissues. Over time, accumulation of more and more scar tissue leads to adhesions. Depending on in which direction endometriosis is growing, these adhesions can have negative implications for fertility.

While endometriosis affects about 10% of the female population, not every woman with this condition will have an infertility problem. It has been estimated that only about 35-40% of women with endometriosis will have a negative implication on their ability to conceive naturally. The rest of the patients with impaired fertility will still be able to benefit from assisted reproductive technologies such as IVF treatment.

Sometimes, certain symptoms can point to the existence of endometriosis. These symptoms include painful menstrual cycles, pain during intercourse, observations during physical examination or ultrasound scan. However, there is only one way to effectively assess whether a woman suffers from endometriosis and that is through a minor surgical procedure called laparoscopy. Laparoscopy allows the observing doctor to look inside the abdominal cavity with a laparoscope for an effective visualization.

While this article aims to provide general information on endometriosis, there are different stages and growth patterns of endometriosis, which will require a different course of action for different patients. It is important that we make a careful assessment of your case before we can assist you with your treatment options. However, when considering assisted reproductive treatment for endometriosis, it should be kept in mind that IVF/ICSI treatments will yield much higher success compared to IUI treatments. It has been shown via various clinical studies that IVF/ICSI treatments can yield success in majority of endometriosis cases despite the fact that both oocyte quality and response to ovarian stimulation may be lower compared to non-endometriosis cases.