How Can PRP Therapies Help With Female Infertility?

Platelets, which are also known as thrombocytes, are a part of our blood involved in wound healing and tissue regeneration. The role of platelets is to recognize the site of injury (interrupted endothelium), adhere to the site of injury and secrete chemical messengers, activating the wound healing process. Platelet-rich plasma (abbreviated as PRP) is the blood product where we obtain the blood sample of an individual and use laboratory techniques to separate the platelet rich part of blood from the part that is platelet poor. This allows us to obtain high concentrations of platelets in small amounts of blood plasma. The purpose of obtaining platelet rich plasma is to magnify and multiply its natural healing effects on damaged tissues in relatively short periods of time when natural quantities fail short of this task.

PRP is now currently being used for a variety of purposes including dermatological applications such as anti-aging, hair re-growth, dental applications,  as well soft tissue regeneration. More recently, clinical trials and animal testing have provided substantial amount of evidence that PRP can have many beneficial effects in the field of infertility through its regenerative effects.

The idea is not far fetched when you think about the every day injuries we suffer in our daily lives – We can fall and bruise, cut ourselves while dicing a tomato. When we end up having an open wound, eventually, inflammatory action is initiated and by our immune system and the wound becomes inflamed with some edema. As healing continues, a yellowish layer is formed over the wound. This layer is a combination of white blood cells (leukocytes), blood clots, platelets, and several growth factors at work, preventing bleeding, infection, and regenerating connective tissue and repairing the damage in the area. Using the same principle, injection of these growth factors into any part of the body essentially provides rejuvenation and cellular regeneration.

One of the most frequently asked questions is whether or not menopause can be reversed. Our knowledge on the subject so far has told us no. Every woman is born with a finite set of ovarian reserves and these reserves decline over time with each menstrual cycle. However, recent advances in research and clinical studies is pointing to the
possibility of regenerating ovarian function even after menopause. According to latest research by Harvard scientists, PRP application in the ovarian cortex can possibly stimulate the germ cell line into developing into ovarian oocytes. Scientists have achieved success with animal testing and observed that injection of growth factors enabled resurgence of oocyte production in the ovaries.

When we first introduced this treatment at North Cyprus IVF Center, it was still in a preliminary stage of research. Initially, results obtained were confusing and not as we had hoped. However, building on reseach, Dr. Savas Ozyigit and his team have noticed that spontaneous platelet activation was a problem that was possibly creating mixed results in patients. Further modifications have been made by the North Cyprus IVF scientists over the years and ovarian PRP application is not a treatment modality which offers considerable success to women with diminished or depleted ovarian function.

In our experience so far, women in premature ovarian failure and premature menopause have been the group who have benefited from this treatment option the most, which suggests that age is still an important consideration even when stem cells are involved.

How Does Ovarian PRP application Work?

PRP application in ovarian soft tissue aims at cellular growth and proliferation in the ovaries based on many properties of platelets. Alpha granules on platelets have been found to be rich in certain growth factors which take part in wound healing and tissue regeneration. Main
ones include:

Epidermal growth factor (EGF) is a single polypeptide of 53 amino acid residues which is involved in the regulation of cell proliferation.
Vascular endothelial growth factor (VEGF) is a signal protein that stimulates the formation of blood vessels.
TGF-β is a multifunctional set of peptides that controls proliferation, differentiation and other functions in many cell types.
PDGF is involved in cell growth, division and growth of blood vessels from its precursors.

Based on the known and predicatable endothelial and vascular growth factor activity, increased vascularization, improved blood supply and stimulation of the germ cell line are the expected benefits of a PRP application. While this is an observed effect, it is not known how long folliculogenesis can be maintained.

There are several key considerations in ovarian PRP application if success is to be obtained. These important considerations can roughly be categroized as follows:

Method
PRP isolation is one of the main factors that determine success in ovarian PRP treatments. It involves a number of considerations such as:

Location
Precise location of the PRP injection is also a key factor in success. Stem cells are found only in the ovarian cortex. Therefore, any treatment not aimed at the ovarian cortex is bound to fail. A PRP injection of a very specific amount is injected into each cortex via trans-vaginal catheter, similar to OPU procedure. The catheter reaches to the tip of the cortex and worked backwards to ensure full cortical coverage. 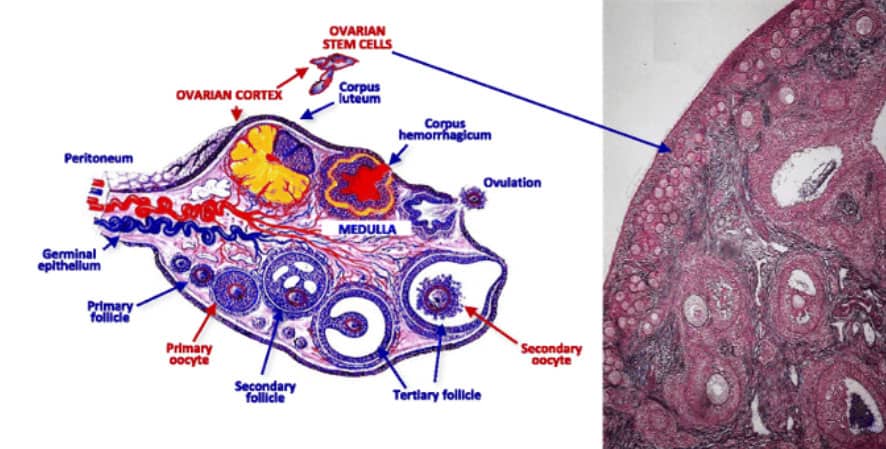 Oogenesis and Timing of Treatment

Any treatment offered to couples for reproduction should keep reproductive physiology in mind. Any action to be taken with respect to assisted reproduction should aim to mimic normal reproductive physiology as close as possible. In ovarian PRP application, the aim is to restore ovarian function. In other words, we aim to grow more oocytes by initiating oogenesis on the dorman stem cell lineage. Knowing the timeline of oogenesis tells us exactly what action needs to be taken at various stages to support the process. Knowing the timeline also ensures knowing when desired results are to be expected.

Below is a diagram showing different stages of oogenesis in a timeline: 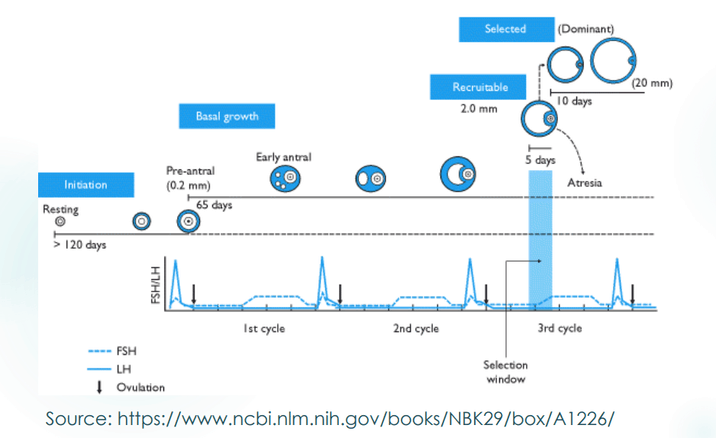 – Human Growth Hormone
– Aromatase Inhibitors are shown to provide added benefit as part of ovarian PRP treatment. Precise timing of these supplements are also important when considering their benefits on oogenesis.

Based on the timeline of a successful oogenesis, we expect dorman stem cell lines to reach ovulation in approximately 4 months. However, women in premature ovarian failure respond in shorter timeframes, owing to the existence of primordial follicles. Therefore, when planning treatment, menstruation status and age of the patient are important considerations.

How Much Does Ovarian PRP Application Cost?

The cost of ovarian rejuvenation via PRP application is 1,750 Euros at North Cyprus IVF Center for both ovaries. The total cost of 1,750 Euros includes the pre-operative blood work (CBC) and the infectious disease screening panel including VDRL, HbsAg, HCV, HIV testing. Therefore, there are no surprises or hidden costs during your visit to our hospital. Our patient coordinators can also help organize your hotel booking during your stay in Cyprus. You will be expected to stay for a minimum of one, preferably two nights in Cyprus.

Are There Any Risks of Ovarian Rejuvenation with PRP?

The PRP injection itself is practically risk free as the process involves injecting the ovaries with your own blood product. There are no artificial chemicals or other potentially harmful substances introduced into your body. However, the way of administration requires sedation, just like you would be sedated in an IVF cycle during egg collection. The side effects of the procedure which involves transferring your blood platelets into the ovaries under sedation may include light pain after the procedure. Very rare side effects include post-operative bleeding and fever.

What Are the Benefits of Ovarian PRP Application?

The main potential benefit is pregnancy with your own eggs even after menopause! Every woman’s response is different and PRP application may not work for some women. Even when it works, and menopause is reversed, it should be kept in mind that menopause is possibly reversed for a relatively short period of time and this may or may not allow for pregnancy. While there are no guarantees, this is the latest advancement in reproductive technologies that can potentially offer a chance of pregnancy with a woman’s own eggs even when her ovarian reserves are depleted. Preliminary studies and the clinical applications show very good outcomes so far, so considering the relatively low cost and very minimal side effects, a woman with depleted ovarian reserves who would like to have a chance of pregnancy with her own eggs is most certainly an ideal candidate.

How Do I Know That It Has Worked?

This is very simple. If you have already entered menopause, the PRP application should restore your menstrual cycles. Numerically, you should see an improvement in your hormone levels. Approximately 3 months after the PRP application, an increase in Anti-Mullerian Hormone levels and a subsequent decline in FSH and LH levels should be observed. These are measurable improvements that will allow you to observe the benefits of ovarian PRP application yourselves! Please keep in mind that not every woman reacts the same way to PRP application and in some cases growth factors can take up to 6 months to show their effect, therefore, tests should be scheduled to monitor progress up to 6 months. Before getting started, we will ask that you have an AMH, FSH and LH test at a local lab. Once you have received your treatment and return back home, we will ask you to repeat the same tests in 3 months time. It is important to use the same lab for your testing in order to eliminate any variations in lab measurements. Pre and Post-PRP Antral follicle count is also a very key determinant of a successful outcome.

Chronic endometritis and endometriosis are problems that can inititate inflammatory processes, which can make embryo implantation very difficult either through natural intercourse or in vitro fertilization (IVF). In recent animal testing, PRP applications have been demonstrated to have cell proliferative effects as well as anti-inflammatory effects while working on tissue repair. PRP application has also been associated with increased progesterone receptor activity. Progesterone receptors are the main actors that help maintain a thick and healthy endometrial lining, which in turn, helps with embryo implantation.

Human studies are also offering identical outcomes. While the studies are still in their preliminary stages, commercial application has started due to potential benefits and the lack of detrimental biological side effects based on performed studies. At North Cyprus IVF Center, we have now started offering PRP applications for patients with chronic endometritis, patients with recurrent implantation and IVF failures as well as patients who cannot obtain a desired level of endometrial thickness for a successful embryo transfer.

​Below, you can view the original research publication by the Harvard scientists that had laid the foundation for ovarian cellular regeneration: