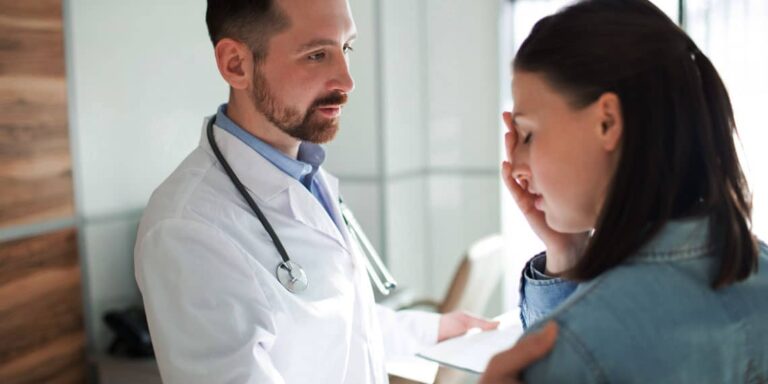 Repeated (Recurrent) miscarriage is defined as the loss of three or more pregnancies. If you have experienced a single pregnancy loss, the odds are, you are not likely to have another miscarriage. However, if miscarriages are recurrent and are experienced in similar time frames of a pregnancy, further investigation will be needed.

One of the first things that needs to be addressed is when the patient is experiencing her miscarriages. Miscarriages experienced at different gestation periods may indicate different factors. If the patient has experienced her miscarriages after the first trimester, then there is an increased likelihood of cervical incompetence as a potential underlying factor. Cervical incompetence can be successfully diagnosed by your gynecologist through testing when there is no pregnancy or via close monitoring during pregnancy.

When the patient experiences her miscarriages earlier on, during the first trimester, then other possible problems are accentuated. For instance, genetic problems with gametes (sex cells) could be one of the many reasons on the list. Sperm related DNA problems are known to cause early pregnancy losses. Similarly, aging oocytes are associated with higher incidence of pregnancy losses in the first 12 weeks of gestation (first trimester). Also, the couple may have chromosomal problems that show no apparent symptoms but cause problems during reproduction (such as chromosomal deletions and translocations). Alternatively, thrombophilic defects that tend to cause blood clotting problems cause miscarriages quite frequently.

Recurrent miscarriages can have many possible causes. When a patient experiences several miscarriages, then it will make sense to get evaluated for the conditions below. The tests are not provided in any order as the required tests for each patient may be different depending on your precise pattern of miscarriages:

Main causes of recurrent pregnancy losses can be categorized as follows: 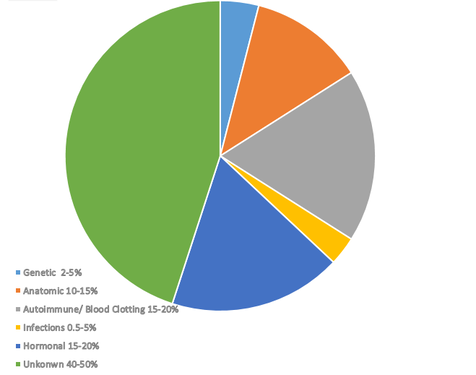 While there are a number of established factors that can be linked to repeated pregnancy losses, causes of almost half of recurrent pregnancies still remain a mystery.

Together, autoimmune factors, hormonal problems and problems with blood clotting make up for almost 70% of all known causes. Therefore, when a woman goes through a number of miscarriages, the starting point for testing would usually involve one of these three domains.

Since cost is a major constraint, sometimes it may make sense to start testing with less common causes if the cost of testing is low. For instance, even though genetic reasons are not the main contributors to RPLs, a karyotype test doesn’t cost too much and if a karyotype problem is identified, it can save the patients thousands of dollars in testing.

1- Genetic Factors behind Miscarriages: All couples with a history of recurrent miscarriage should have peripheral blood karyotyping performed. The finding of an abnormal parental karyotype will necessitate consultation with a geneticist. A karyotype analysis will provide information about chromosomal abnormalities. In some cases, either one of the parents may have a silent chromosomal aneuploidy (such as reciprocal translocation) which does not have any manifesting symptoms, but results in genetically abnormal children at the time of conception. Certain genetic abnormalities can be screened through pre-implantation genetic screening methods while some others may require using alternative options depending on the type of genetic abnormality.

In some more rare cases, the miscarriage may depend on the sex of the child. Some women can have problem free natural pregnancies with their female children but can have unexplained multiple pregnancy losses with their other pregnancies. At first, patients may not be suspicious about the possible link between having a male child and a miscarriage. However, clinical studies have shown a strong link between X-linked disorders and miscarriages with male babies. Female children receive two sets of X chromosomes; one from the mother and one from the father, therefore, if there is a mutation on one of the genes on either one of the X chromosomes, then the chromosome with the mutation can be inactivated and the other X chromosome which is normal remains active, and the female child grows up to be a disease-free individual. However, male children receive one copy of X only and when there is a defect on the X chromosome, then the child will carry the disease.

In some women, due to a genetic problem, inactivation of the diseased chromosome may not be correctly done (called skewed X-inactivation), meaning, rarely, some females may also carry these X-linked disorders. While females will usually have a much lighter version of the genetic condition compared to males, due to errors in X-inactivation, they can also have this disease and pass it onto their children. Some of these X-linked diseases can be fatal for male children, therefore, receiving the diseased copy from the mother may result in severely diseasd male children, which naturally result in a pregnancy loss.

If the female patient is a carrier of an X-linked disease and has skewed X-inactivation, then she is a manifesting carrier and her male children are at the risk of an X-linked genetic disorder. Depending on the condition, some pregnancies end up in miscarriages and some children are born with genetic defects. The problem is, we don’t know if this is the case and there are more than 800 genes on the X chromosome. It is not possible to screen all the genes for a possible mutation. One thing is, if the patient is a manifesting carrier, we would expect some sort of a family history with an X-linked genetic disorder. For instance, if the female patient has any brothers, they must be affected by this genetic disorder, or she won’t have any brothers at all. So some genetic background information is useful at this point to rule this out. Are there any affected males in the family (uncles/great uncles?) Or possibly other women in the family who have experienced similar patterns of miscarriages?

2- Cervical Weakness and Miscarriages: Cervical weakness is a known anatomical cause of recurrent miscarriages. The cervix (or neck of the womb) is normally expected to be strong enough to remain closed throughout the course of pregnancy due to its flexible anatomy allowing it to extend and enlarge with its growing contents. In fact, it remains strong throughout pregnancy and near the time of labor, special hormones are released to make it softer so that it is dilated enough for a successful baby delivery. With an incompetent cervix, the cervix is anatomically weak, making it unable to carry the baby. Typically, miscarriage caused by an incompetent cervix occurs between sixteen and twenty-four weeks of gestation.

3- Endocrine (Hormonal) Factors and Miscarriages: The term endocrine factor in infertility refers mainly to the absence of ovulation, which results in disorders of the menstrual cycle (oligomenorrhoea, primary or secondary amenorrhea) and less commonly to the condition of luteinized unraptured follicle. In cases of oligomenorrhoea or amenorrhea satisfactory results can be achieved with conventional ovulation induction methods, avoiding the use of assisted conception techniques. In some cases, IVF treatment can help obtain more desirable results and in some cases, if oocyte quality seems to be an issue, IVF with egg donation becomes an option.

4- Immune Factors, Blood Clotting and Miscarriages: These can include Antithyroid antibodies, Antiphospholipid syndrome, Alloimmune factors. There are tests that can be administered. In some cases, we find that suppressing your immune system response around the time of embryo transfer reduces the likelihood of an implantation failure and a very early miscarriage.

Inherited thrombophilia defects, including activated protein C resistance (most commonly due to factor V Leiden gene mutation), deficiencies of protein C/S and antithrombin III, hyperhomocysteinaemia and prothrombin gene mutation, are established causes of systemic thrombosis. A thrombophilia gene panel needs to be evaluated to make a diagnosis. A systemic thrombosis refers to a condition where the patient experiences problem with blood clotting. Thorombophilia initiates a hypercoaguable state which, in turn, leads to thrombosis (clotting) in blood vessels at the site of embryo implantation, causing a failure of pregnancy. It can also take place later on in the placental blood circulation where blood clots can find their way into the baby’s circulation and possibly stop his/her heart, causing a miscarriage. Thrombophilia problems are the most common causes of recurrent miscarriages which take place within the first trimester. Treatment of thrombophilic defects consists of using low-dose aspirin prior to and post-conception, followed by low-molecular-weight heparin (blood thinners) immediately after conception. During IVF cycles, sometimes blood thinners can be started prior to embryo transfer in more severe cases. If there is a suspicion of a thrombophilia defect, the following tests are the first step in investigation:

5- Infective Agents and Miscarriages: TORCH (Toxoplasma gondii, Rubella, Cytomegalovirus and Herpes simplex) screening can be helpful when investigating the cause of recurrent miscarriage. These infections usually cause a single miscarriage and do not contribute to recurrent miscarriages. It is important to distinguish between an active infection and a past infection. There are two types of antibody testing used to test for TORCH infections. These are IgG and IgM immunoglobulins (antibodies). The key difference between these two immunoglobulins is related to exposure time. IgM antibodies are commonly found in the body immediately after it has been exposed to disease, indicating active infection. IgG antibody production is the long term response of the body to the infection. For instance, when a person is exposed to Toxoplasmosis infection, she will have elevated IgM antibodies in her blood test immediately after the exposure. This is the immediate response. However, once there is an infection exposure, the person also acquires long term immunity against it by developing IgG antibodies, which happens in the longer term- months after an infection. While IgM is an indicator of a current infection, an IgG indicates a recent or past exposure to the illness, suggesting the person has immunity for the infection. For patients with active infections (elevated IgM antibodies), we recommend a course of antibiotics against opportunistic bacteria and wait for a few weeks until the infection is no longer active before proceeding with IVF treatment. For patients with IgG positive antibodies, who test negative for IgM, there is immunity, and no further action is necessary.

Please share this information on social media to increase awareness!

How to improve (Boost) your level of fertility?