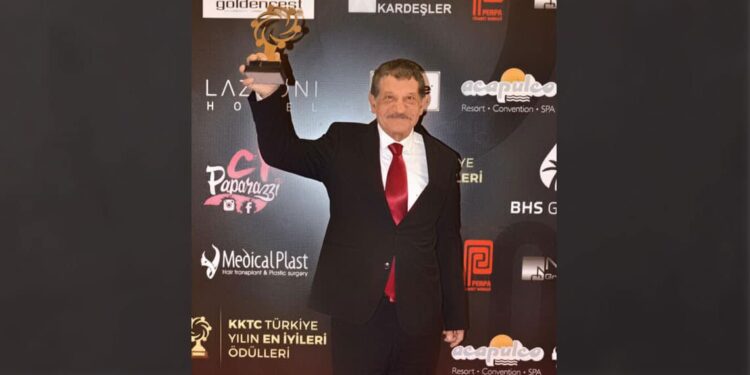 Associate Professor Dr. Savas Ozyigit, a pioneer in the field of assisted reproductive treatments in Cyprus, and the director of North Cyprus IVF Center receives a “Lifetime Achievement Award” for his contributions to the field of medicine over the course of his career. Adding one more trophy to his collection of many, Dr. Savas Ozyigit gave a short speech at his award acception ceremony.

During his speech, Prof. Ozyigit said “It was twenty years ago when I first mentioned it to colleagues that it was a shame couples with infertility problems could not be helped in North Cyprus and had to travel to other countries to seek help. People said it was not a good idea to invest in such a big project for such a small population. They said it would not be profitable and they said I might as well throw my money into a trash can. It wasn’t the smallness of population that was the problem. It was the small faith they had in medicine. Today, I stand here holding an award for my work and accomplishment. This is the field of medicine thanking me for believing and taking that first step that no other person was willing to take just because they did not think it was financially viable. Not only it has been financially viable, it has allowed me to train many others to go into this field and become my competitors! There are now ten IVF clinics in North Cyprus! Thank you medicine, for being such a rewarding field. I would have chosen you all over if I were to come to this world again…”

Dr. Savas Ozyigit is the founder of North Cyprus IVF Center, the very first IVF clinic in Northern Cyprus, which was established in 1998. Almost all of the current IVF specialists in Northern Cyprus have been his students at one point during their medical training. As a medical innovator, he has always introduced many firsts in the field of medicine on the island. The first bone densitometry, the first mammogram, the first radical hysterectomy operation, the first IVF clinic and the first genetics laboratory are just a few examples.

We are sure that Dr. Savas Ozyigit still has many awards ahead of him. To contact North Cyprus IVF Center and schedule an appointment with Dr. Savas Ozyigit for your consult/fertility treatment, please use call/text/whatsapp +90 548 882 8000 / +90-548-876-8000.